At the end of last year, stand-up mathematician Matt Parker tweeted this photo: 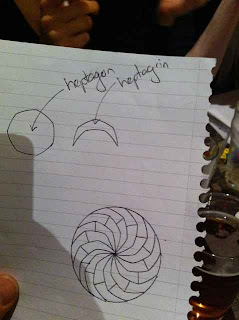 At the time, I was sat in a 'surface and colour' lesson (mainly weaving coloured paper/making origami swans) and I was incedibly bored. So I decided to abandon the work I was meant to be doing and proceeded to draw a series of these heptagrin spirals and colour them in.

Earlier on in the lesson I had coloured some sheets using inks and brusho, which is a fine powder that gives little bursts of colour when mixed with a water based solution. The rest of my day was then spent cutting out tiny heptagrins from the brusho paper and gluing them all down on paper. This is what I ended up with: 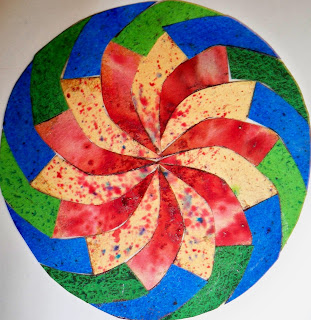 The shapes are made by drawing part of the way round a 50p piece, turning it and drawing around the same part again. This gives a circle which is about 6cm in diameter and cutting each haptagrin in half gives a kind of flower effect in the middle.

I was ridiculously proud of myself for making this- partly because a friend told me I couldn't... So to them: HA. But when my tutor came along to see how my work was going, she wasn't best pleased. For a couple of milliseconds, it looked like she was going to say "Oh Jess, that's a beautiful picture! Have a gold star." But instead out came the whole "Yes it's a pretty spiral, but is it what you're meant to be doing?" lecture.

As soon as I got home I posted it into the twittersphere to see if I could get a better response from that of my tutor. I think I put the caption "The only person on my course making art nerdy," or something along those lines. Anyway Matt picked up on it and gave it an RT.

Next thing I knew I was addicted to making these spirals. I made them out of block colours, patterned paper, changed the size of them, trying out different combinations each time. I even did a couple of prints at college which my print tutor HATED. She gave me the 'how to use your time wisely' lecture... 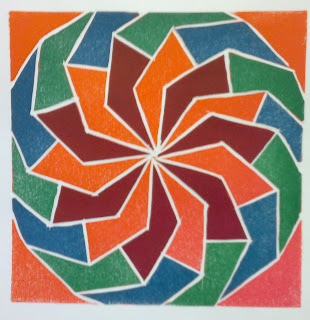 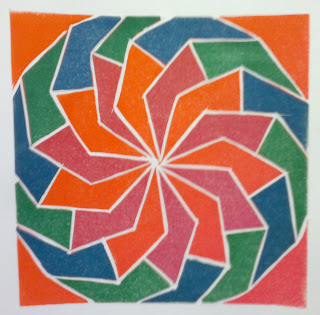 After a while, I got a bit bored of heptagrins on paper so I decided to think of something a bit more challenging. I wanted a 3D﻿ representation of a heptagrin spiral. Then I realised I could cut a hole in the centre of the spiral and that would act as the waistband of a skirt. I knew it'd work as I've made loads of circle skirts and I love the full effect they give. I had an idea of how I wanted the finished skirt to look: 50's shape, but with a colourful and intricate pattern within the skirt.

So I tweeted to design idea to Matt and the next day went to college, got the biggest piece of paper I could find (I was asked by several tutors whether this was an effective use of resources, to which I replied: YES) and drew the biggest heptagon I could. The only rulers in the art dept. at college are 30cm so naturally, I had to improvise and use a table leg with a tape measure taped to it. After drawing various lines and curves, I had my half a heptagrin and used it as a pattern piece to cut 28 half heptagrins out of a sheet (fashion student tip: don't buy cotton new off the role. Buy sheets as MUCH cheaper).

Now comes the part where I had LOADS of college stuff to do so the heptagrin skirt took a back seat but I did find time to travel to London with another nerd I found on my course, Sarah @WeLikeBears and we went to see Festival of the Spoken Nerd at The Bloomsbury Theatre. Which, by the way, was a fantastic night of science and comedy and I thoroughly recommend you go and see! So I tweeted FOTSN after the show and said I was planning on booking tickets for their next show in May. Out of the blue, I received an email from Matt asking if I'd like to show off my heptagrin skirt on stage, at The Bloosbury Theatre, at the next show. When I first read the email, I nearly dropped my cup of tea onto my laptop. Nothing like this ever happens to me! The Bloomsbury Theatre. In London. A sell-out gig with over 500 people. How could I say no‽

So then came the fabric shopping (such fun) and the making and the photos which Sarah did for me. I'd decided to adapt the skirt into a dress and added a bodice to the top. Here are a few of the pics. This was just before I'd finished the hemming so excuse the odd strand of fabric! 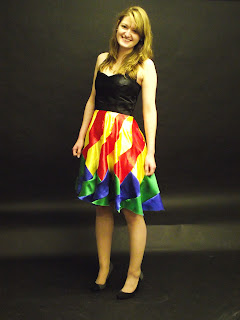 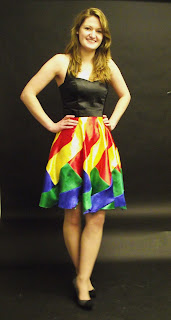 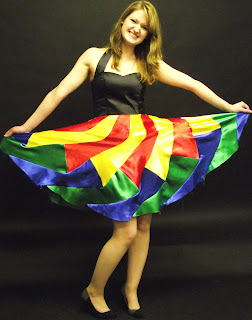 So yesterday was the big night and as soon as I went through the door at the theatre one of the FOTSN team came up to me and said "You're the Heptagrin Girl. Go through that door and they'll give you a pass that gets you into the Green Room. You'll find everyone in there." I was thinking this must be what normal people feel like when the get to go backstage at Glastonbury :P So I went with my mathsy friend Em and was introduced to Matt Parker, Helen Arney and Steve Mould, the behind the scenes people and the other acts that were performing at the show. I had also been asked to make a heptagrin spiral on paper for Matt, so I made a HUGE one that he could put on his office wall. 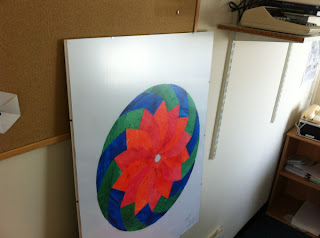 On our way back down to take our seats, I met at least three people who all said "Hey, you're the Heptagrin Girl!" Not gonna lie, for a second I imagined I was a superhero, called Heptagrin Girl, who threw heptagrins at baddies.

I didn't go on stage until the end of the show and it was only for a couple of minutes, but I was on stage with Festival of the Spoken Nerd, at The Bloomsbury Theatre. How cool is that‽ :) I thought that was my 2 minutes of fame over, but when we walked out to the foyer, I had people coming and saying how much they loved the skirt and that it was so imaginative. I had a few tweets too with people saying they wanted one. My work does get praised at college but it can also get lost in everyone else's work. But because these people were nerds, and knew that the design was based on mathamatical shapes, they understood it and appreciated it not only because it looked good (yes, in my opinion), but also because it was a clever fusion of art and maths.

So a massive THANK YOU to Matt, Helen and Steve for being so welcoming at the show and letting me take part in Festival of the Spoken Nerd and yes, there I will be wearing a new creation at the next show 'Life, Oh Life' in January 2013.

And if anyone would like to be the owner of either a 2D heptagrin spiral picture or a 3D heptagrin spiral dress (there are currently only one of each in the world), let me know via this blog or twitter (@JessHawke92) and I will get back to you asap with further contact details.